At the age of eight he and his brother Don were taught music by their father Leo who was also a professional musician. In his own words Richard gives thanks to God for his gift of music and to his mother and father who put the guitar in his hands enabling him to lift people up with music. Dick Eliot is a gold card member of the Musicians Local #369, and a life member of the Milwaukee Musicians Union Local #8.

While in the Military's NORAD Command Band under Col. Mark Azzolina, Dick played on numerous television shows such as the Steve Allen Show, the Dinah Shore Show, and the Bell Telephone Hour. In Las Vegas he did the Ed Sullivan Show, the Merv Griffin Show, the John Davidson Show, and the Tony Awards.

Dick returned to Milwaukee, Wisconsin, from Las Vegas in 1996, to be a care-giver for his mother, Mary, who passed away two and half years later at the age of eighty-nine. Richard shares time in Las Vegas and in Milwaukee where he performs with his jazz trio and duos. He has been featured soloist with the Milwaukee Symphony and has backed numerous stars with the Symphony's Pop Series, including Debbie Reynolds, Neil Sedaka,
and Bill Conti. 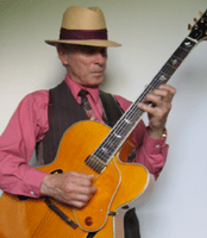 Richard (Dick) Eliot has a musical career that has spanned five decades, thirty-years of which he performed in Las Vegas…the Entertainment Capital of the World.

Dick was chosen to play for the Nixon/Agnew inauguration in 1969 with the Caesar's Palace showroom band/Les Brown band. Dick was also a voting member of NARAS - the National Associations Recording Arts and Sciences. During his time in Las Vegas, Richard did world tours with Sammy Davis Jr., Andy Williams. He also  traveled with Shirley MacLaine, Marilyn McCoo, and the Original 5th Dimension.