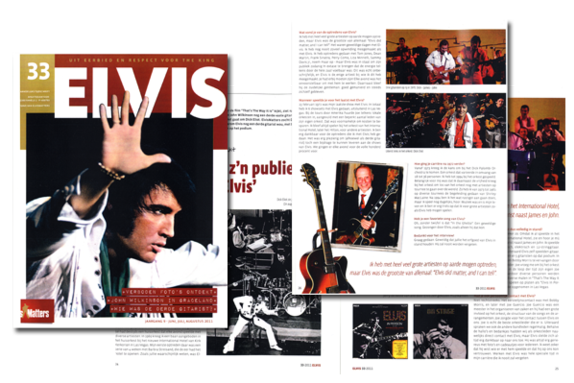 Whomever has seen the movie "That's The Way It Is" has seen Dick Eliot... in the Joe Guercio Las Vegas orchestra. He played with the notable James Burton, and Jon Wilkinson.
Elvis Matters spoke with Dick about his work with Elvis:

Ferdy Geertsma:
Dick, before I ask you questions about your work with Elvis, we would like you to introduce yourself to the readers of Elvis Matters.
Dick:
Of course. My name is Richard (Dick) Eliot.
I was born in Milwaukee, Wisconsin, and I still live there after thirty-three years in Las Vegas, where I performed most of my 50 years in the music business.
I still regularly travel between Milwaukee, and Las Vegas, and do gigs with my trio, duo, and as a solo guitarist.
My father, Leo, introduced my brother Don and me to music at an early age. He was a great teacher, who instilled in us a love for music and our instruments.

Ferdy: So you started your musical career with your dad, and brother?
Dick: Yes, that is correct. My dad literally gave us our first instrument, and encouraged Don, and I to entertain and please the people with our music. I am grateful for both parents, and the sacrifices that they made for us.

Ferdy: How did you come in contact with Elvis?
Dick: After playing with several big bands, and trios in and around Milwaukee, I moved to Las Vegas in 1963, after serving two years in the army, playing guitar in the North American Air Defense Band, "The NORAD Band", under Major Mark Azzolina.
I did a lot of studio, and TV work in Las Vegas, including lead guitar on the album "Today My Way" by Patti Page. Also Perry Como's "Live in Las Vegas", and "It's Impossible." In 1966 I was chosen as the guitarist for the new Caesar's Palace in Vegas, where I played for two and a half years, seven rights a week in the Nat Brandywynne house orchestra. Most of the hotels in Vegas at that time had house bands that I backed major stars, and production shows.
I went to the Stardust Hotel in 1968, to play the Lido De Paris, and then in 1969 I was offered a gig in the house band at the new International Hotel in Las Vegas, owned by Kirk Kerkorian, Barbra Striesand was the first to open the hotel showroom, followed by Elvis.
Then came Nancy Sinatra and the Osmond Brothers, Tom Jones, Perry Como, to name a few.

Ferdy: Did Elvis use a regular house band at the International?
Dick: Yes that's right. The orchestra consisted of 33 to 40 musicians, including a full string section.
He chose his own back up at the time, as he had just come out of retirement.
His musicians included James Burton, John Wilkinson, Ronnie Tutt, Jerry Scheff, and Larry Muoberac.
The Bassist Jerry Shef and I played together with the original Fifth Dimension. Jerry was one of the best of all around musicians that Elvis had chosen

Ferdy: Did Elvis have the house band fully established?
Dick: Yes, in the beginning that was certainly true! Because I played in the house orchestra. My job was to blend in as the third guitarist playing with James, and John.
The guitars that I used were an acoustic, electric, and a 12 string.
Also, next to Elvis was his long time friend Charlie Hodge on an acoustic, like Elvis' guitar, doubling every thing that Elvis played.
In fact , when Elvis couldn't make a rehearsal Charlie played and sang Elvis' parts perfectly.
In 1971, the hotel decided to replace the original band leader, and hired Joe Guercio and his orchestra.
Joe asked me and the trombone player to stay on.
It now became the International Hotel's Joe Guerico Orchestra.
I was privileged to be on the video "That's The Way It Is" and the LP's "In Person" and " On Stage".

Ferdy: Did Elvis contact you?
Dick: No, I was contacted by Bobby Morris, and later by Joe Guercio.
Joe was a fine conductor and a master at organizing things.
He would score the songs that Elvis did, and then give them to to a Las Vegas orchestrater by the name of Don Hanna. He would arrange all of Elvis' songs, old and new, for the band. Including the great theme from Space Odyssey 2000, that Elvis used for his opener.
Since Elvis seldom performed with a large orchestra, he used these wonderful arrangements right up to the end.

Ferdy: Did you have direct contact with Elvis?
Dick: No, Joe Guercio provided the contact between Elvis and us.
Of course we talked with his band members regularly, but with Elvis, it was hello, and his occasionional smile, with a nod of approval. and his memorable " Well A Hah".
I'm sure he knew who was playing for him, and he could depend on us at all times.
He was very generous to everyone, and was always giving us gifts, photos, and albums.
It was a very special time in all of our careers, and a time that I shall never forget.

Ferdy: What did you think of Elvis's performances?
Dick: I've played for a number of great stars on this planet, and I believe that Elvis was one of the greatest of them all! Elvis matters. I can tell you that for sure.
Those were wonderful times with Elvis.
I've seen so much excitement created by other stars that I played for including Frank Sinatra, Sammy Davis Jr. Dean Martin, Tom Jones, Liza Minnelli, and Barbra Streisand to name a few.
Elvis', with his style and energy brought his audience to degree of ecstasy beyond words each time he performed. I wish that you could have been there.
Every night was an incredible experience.
He was the perfect southern gentleman at all times. Well mannered to everyone, especially the girls that ran up on stage for a kiss.

Ferdy: When was the last time you played for Elvis?
Dick: It was in the Spring of 1972.
A total two and a half years as part of the International Orchestra,
Including all of his performances there over that time period.
He took his group on his regular tours, with an occasional addition of the Joe Guercio orchestra.
During my time at the hotel I played for all of the stars that performed there.
I was grateful to be able to the third guitarist for Elvis during those years, as we gave one hundred percent each night for him. It was a wonderful time!
Music is my life, and I am very proud to have had the opportunity to play for the great Elvis.

Ferdy: How did your career continue after 1972?
Dick: I free-lanced between Caesar's Palace, the Flamingo, Desert Inn, Riviera, the Dunes, and the MGM.
In 1974 I was hired by Dick Palombi to play in his orchestra at the Riviera, where I stayed until our contact was breached in 1994.
We were one of the last of the big show room bands, as taped shows had taken over in the majority of the hotels show rooms. Dick Palombi was a great friend since the early 60's when I first played for him as he conducted for Buddy Greco, and Vic Damone. He would allow me to go out on world tours with stars like Andy Williams, Sammy Davis Jr. Shirley MacLaine, and Marilyn McCoo!
After 1994, I waited around for work but as I said, taped shows had taken over, and the Las Vegas that we had known was gone. All that was left were production shows, and self-contained acts.
I moved back to Milwaukee in 1996 and became a care-giver to my Mother for two and a half years before her passing.
I was blessed, and thank God for my career, and that experience, as it made me realize that my success was not about me, but to be able to care for her at that difficult time in her life.
I was able to find gigs in Milwaukee with local jazz groups before forming my own trio.
I played with the Milwaukee Symphony, and various Broadway shows, hotels, and jazz clubs here, and in Chicago.

Ferdy: Do you have a favorite Elvis song?
Dick: Oh, without a doubt, "Down In the Ghetto". A great Mac Davis song, with a great message, sung by Elvis as only he could.

Ferdy: Thank you for the interview, Dick.
Dick: You're welcome. All the best to you and your fine work in preserving the Elvis legacy.
He will never be forgotten.